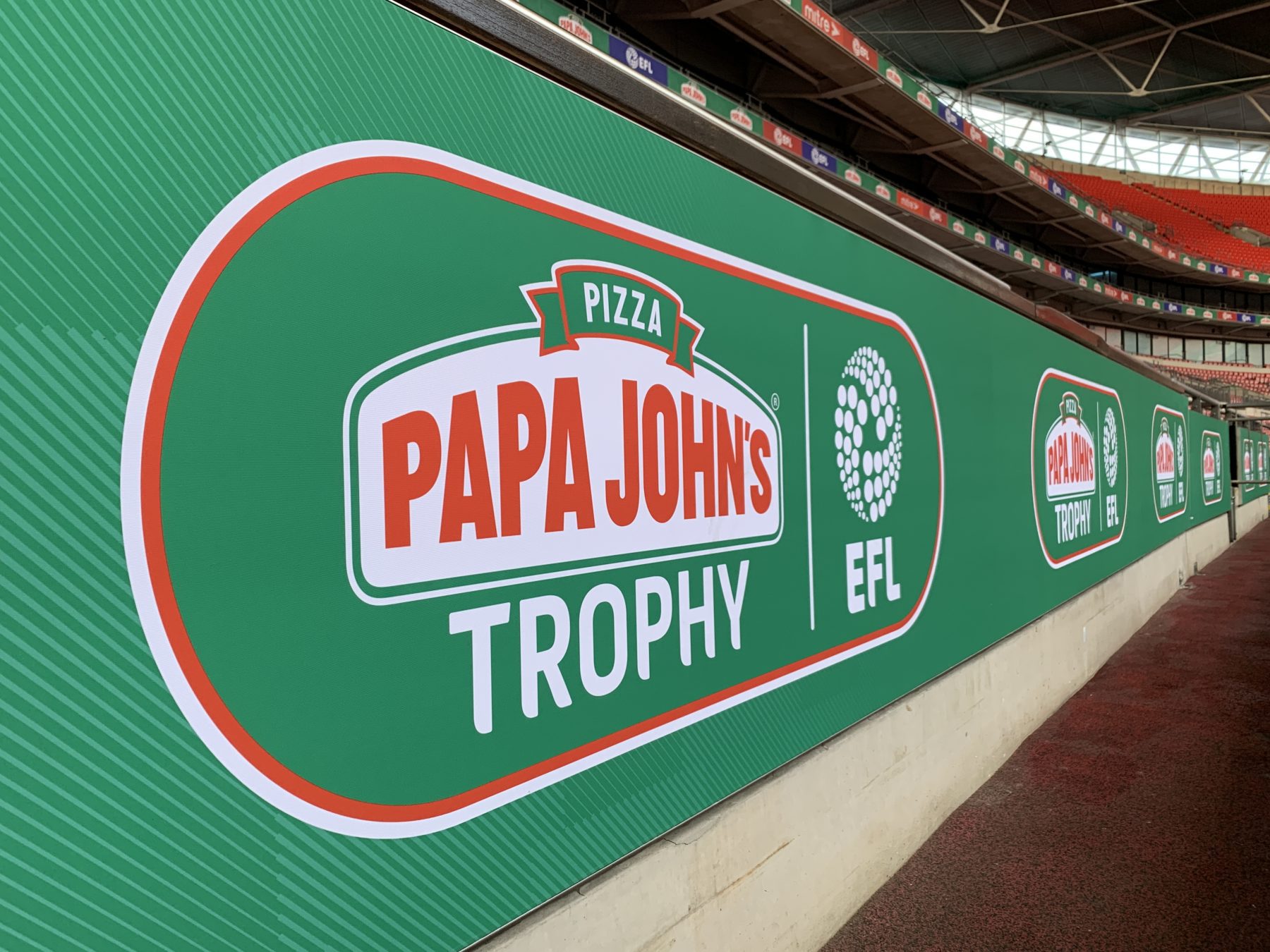 MacroArt has completed an installation of more than 3000 m2 of graphics and signage at the EFL Papa John’s Trophy Finals ‘Wembley Weekender’ held at Wembley Stadium this month, ensuring a net zero carbon win for the environment.

As part of MacroArt’s drive for carbon neutrality across its business, the seat kills (which represented over 2500 m2 of the whole project) were produced from the PVC-free material, Kavalan, from suppliers CMYUK, the UK’s largest independent supplier of large format digital printers, cutting equipment and materials. This immediately reduced the project’s overall carbon footprint by more than 30%, when compared with traditional banners. Following the completion of the event, all graphics and signage were recovered by the MacroArt team and returned for recycling in the relevant waste streams.

In addition, the carbon footprint of the materials used for the event was also calculated and has been offset by MacroArt’s investment in UK Woodland Carbon Units to deliver a net zero carbon impact.

“Sustainability is key to many of our clients and providing graphics that have a minimal impact on the environment whilst maintaining performance is a game changer for today’s events,” said Matt Guise, MacroArt’s Sales Director.

Held on the weekend of 13-14th March, two finals in two days presented the installation team with the unusual extra challenge of rebranding sections of the stadium overnight, to ensure the team-specific branding was in place. Walls around the holding area, team dugouts and “Spot the Ball” seat kills were removed and updated after the first game by the MacroArt installation team.

Despite this, the huge project was delivered on time for each of the finals which saw Salford City and Sunderland AFC crowned winners for the 19/20 and 20/21 trophies.

Matt added; “It was very rewarding to work with an organisation as committed as we are to carbon neutrality, and the team at EFL supported our efforts at very stage.

“We look forward to continuing our work with them and it is clear that reducing our carbon footprint will remain at the very top of the league table for both our organisations.” MacroArt reports record growth on the back of resurgent economy

MacroArt builds for the future by keeping it local

HOW CAN WE HELP?

We would love to support you with your next project

Get in touch
call 01767 677946
MacroArt, Eltisley Business Park, Potton Road, St Neots, PE19 6TX
Cookie Policy ©2021 MacroArt Site by Alt.
We use cookies on our website to give you the most relevant experience by remembering your preferences and repeat visits. By clicking “Accept All”, you consent to the use of ALL the cookies. However, you may visit "Cookie Settings" to provide a controlled consent.
Cookie SettingsAccept All
Manage consent

This website uses cookies to improve your experience while you navigate through the website. Out of these, the cookies that are categorized as necessary are stored on your browser as they are essential for the working of basic functionalities of the website. We also use third-party cookies that help us analyze and understand how you use this website. These cookies will be stored in your browser only with your consent. You also have the option to opt-out of these cookies. But opting out of some of these cookies may affect your browsing experience.
Necessary Always Enabled
Necessary cookies are absolutely essential for the website to function properly. These cookies ensure basic functionalities and security features of the website, anonymously.
Functional
Functional cookies help to perform certain functionalities like sharing the content of the website on social media platforms, collect feedbacks, and other third-party features.
Performance
Performance cookies are used to understand and analyze the key performance indexes of the website which helps in delivering a better user experience for the visitors.
Analytics
Analytical cookies are used to understand how visitors interact with the website. These cookies help provide information on metrics the number of visitors, bounce rate, traffic source, etc.
Advertisement
Advertisement cookies are used to provide visitors with relevant ads and marketing campaigns. These cookies track visitors across websites and collect information to provide customized ads.
Others
Other uncategorized cookies are those that are being analyzed and have not been classified into a category as yet.
SAVE & ACCEPT